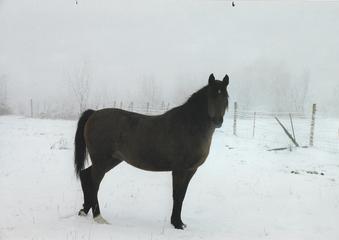 After I transferred back to Washington, I bought a registered Russian-Arabian mare named Petra.  I had these fantasies in my head that a spirited horse like her would be the bomb.  Well, after a year or two of finding out just how spirited she was, I’d pretty much given up on making a riding horse out of her.

My Border Patrol partner, Don Holguin decided that he wanted her.  I told him she was a little too spirited and he just laughed and said, “Good.”

Don checked her out, led her around and was generally pleased with her.  So, we made a trade.  Don was now the owner of an absolutely beautiful mare.

One day he brought his son Quentin to see her.  They were brushing her, leading her around and finally he helped Quentin get on the horse.  Petra looked at the boy on her back and just stood there.  It was amazing.  Don turned his back and walked away about three or four paces just in time to hear his son screaming as he sailed in the air about five foot in front of Petra.

Maybe she was just having a bad day or had a burr or something.  Could a been.  I reiterated that she was extremely spirited and a bit mean.  Don just laughed.

Well, a couple of weeks later, Don was there grooming her, petting her, feeding her some grain—everything one would think would make her trust him and like him.  He walked around the back of her and was looking at her from the side when she lifted her rear leg and whalloped Don solid in the thigh.

He claimed it felt like he’d been hit by a stun gun.  It knocked him down and, for a moment, he thought Petra had broken his leg.  Well, if you know Don you know that he’s a big man.  That was the only thing that saved him from having a broken femur!   Don stated that after kicking him, Petra just stood there looking at him wondering why he was lying on the ground!

The next day he showed me the bruise which was easily as big around as a Frisbee.  Black throughout.

I thought for sure he’d want his money back but he just said he’d not give up.  And he didn’t.  He finally moved her to a stable in Kennewick where he could have more access to her.  Being a beautiful horse, she soon had a few admirers and Don, being the shrewd businessman that he sometimes can be, sold her. 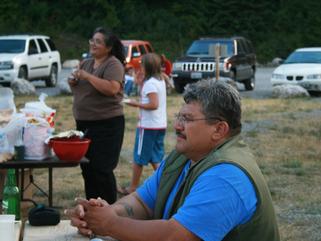