Johnny and I were being left behind.  The SUV we were driving had tons of rough miles on it and the engine wasn’t able to keep up.  But we went as fast as we could and at the worst maybe got a quarter mile or so behind them.  I remember Johnny almost smacking me wanting me to catch up with the group and I was trying but was only able to keep them in sight.

The Castroville PD unit passed us but, a moment later, he was on the side of the road against a guard rail.  It turned out he was trying to change the channel on his two way radio and came into a turn too fast.  Luckily he wasn’t hurt but I’m sure his pride was!

Gabe and Rick soon advised us that San Antonio had formed a rolling road block which meant they had several cars abreast and were forming a hopefully impenetrable road block.

I remember coming over a small knoll and seeing the huge array of police lights in front of us.  Both Johnny and I were truly impressed and mesmerized by this show of flashing red and blues!  “It’s like Christmas!”  One of us commented and we both laughed.

The rolling road block allowed us to catch up just as the Lincoln came up behind them.  We’re not sure but we think that the engine finally gave up the ghost as the Lincoln slowly came to a stop.   Then it was utter chaos!

Johnny and I jumped out of the vehicle, our guns drawn but there was a San Antonio cruiser with a female officer right in front of us.  Shots were fired.  Luckily no one panicked and started shooting at the Lincoln!  We later found out that the DPS Trooper had fired a couple rounds into the tires to make sure the vehicle wasn’t leaving.

We ran up and joined the female officer behind her cruiser.  The female officer had her gun pointed across the hood of her vehicle and was screaming at the occupants.  She was so excited that neither Johnny nor I could tell what the hell she was saying.

Suddenly a DPS Trooper ran up to the vehicle and pulled the driver out onto the ground.  Johnny and I followed suit and opened the passenger door and yanked a very scared illegal alien out of the car and onto the ground.   Other officers soon had the remaining occupants on the ground.  Six aliens and a driver was the total.

Everyone was handcuffed and we took the aliens and put them in our vehicle.  The driver ended up in the back of a police cruiser.

As the adrenalin slowly dissipated we meandered around talking to the dozen or so officers that were at the scene.  Somehow, maybe because it was a fiasco, the DPS officers decided that we had started this mess and that we were the feds so we should take the whole thing!  They’d send their charges against the driver to the prosecutor but we could keep the actual person.

As we were standing out there, I look over and one of the DPS Officers is talking to a TV News Crew.  Suddenly I saw them pointing at me and Johnny.  The crew came towards me with the camera rolling and a young female reported asking me, “The Texas Highway Patrol says that you started this high speed chase….can you tell me what led to it…”

I stood statue still, with a deer-in-the-headlights look as I stared mouth agape straight at her.  Finally I managed to say, “We’re not allowed to comment,” and my legs began to work and I scurried away from her. Last thing I needed was for my boss to find out I was in a high speed chase all the way to San Antonio!!!!!

Johnny and I, with the help of Gabe and Rick, transported the occupants back to the Uvalde Station.  We processed the load, and I wrote the report being more than a little vague on where the stop was made and downplaying how large the chase had become.  When the day crew came in, we passed the aliens and driver off to them and went home to sleep.

About 1:00 pm, my phone rang.  It was Charlie Mac Porter and he told me to come into the station.  I knew I was in trouble.  I arrived at the station and was brought into the sups’ office.   I remember very well how this began, “Bob, it’s always best to tell us when you’ve made the news!  The chief doesn’t appreciate watching the noon news in Del Rio and seeing you and Pfeifer making the San Antonio news and then trying to explain how he didn’t know anything about it…”  I also remember every one of my bosses saying that we weren’t in trouble just that it’d be better to give them some heads up if something big like this happened again.

Of course it would, and of course the next one would also start in Hondo with a stolen police car…but that’s another story!

Border Desperation came out July 5th and its sequel, Border Alliance is available for Pre-order now!

They are FICTION and OVER THE TOP adventure--not regular Border Patrol duties even though many Border Patrol Agent's real life adventures would make these stories seem dull!!!!!!! 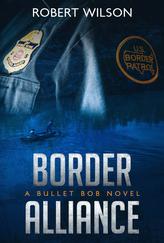 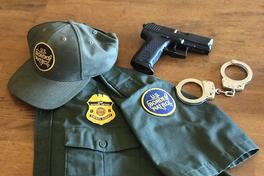 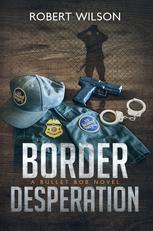 ​​All the real excitement starts in Hondo…

Hondo was 40 miles east of my station in Uvalde but it seemed like I was there a lot and that a good bit of excitement began there.

Two Hondo Police Officers, Gabe Gomez and Rick Valdez were a couple of our favorites and we’d often hang out with them, drinking coffee and chatting.  Those were always good times.

One night, Johnny Pfeifer and I had done just that and were heading back to Uvalde when, on the edge of Hondo, we passed an older Lincoln that we both were sure belonged to another of our crew, Dean Sinclair.   It was close to two in the morning and there wasn’t any other real traffic so I decided to mess with Dean.  I flipped a U-turn and started accelerating up behind the boat of a car.  It was immediately apparent that Dean recognized us because his car was also accelerating to well above the speed limit.  I had to floor the piece of crap SUV we were assigned, to gain on him which we did, slowly but surely.

By the middle of town we were doing double the posted speed limit and both of us wondered why Dean would be that reckless.  As we got close to the speeding car, it became apparent that this wasn’t Dean but a similar Lincoln stuffed full of people.  We’d accidently come upon a smuggling load of illegal aliens!

I hit the red and blues and the Lincoln did just the opposite of slowing down.   It was now a full on high speed chase!

Johnny got on LERN which is a car to car network that we used to communicate with local law enforcement and advised Rick Valdez and Gabe Gomez of our situation.  They advised that they were enroute which gave us both an added sense of security as we were blowing through the City of Hondo which has a prominent sign which reads…”This is God’s Country.  Please Don’t Drive Through it like Hell!”, at more than 80 miles per hour.

Rick and Gabe caught up to us just as we were leaving the city limits.  By now we were well above the 85 mph that our crappy SUV’s speedometer read for a maximum.  The Border Patrol had many rules and regulations involving high speed chases; maximum speed allowed; constant contact with the BP dispatch and so forth.  Well, the maximum for an SUV was supposedly 80 and honestly neither of us knew that for sure but had heard it through the rumor mill.  I was kinda glad that our speedometer stopped at 85!

Rick and Gabe passed us and took over 1 and 2 slots in this chase.   “Back off a bit guys,” Gabe advised.  “DPS is going to try to slow him down.”  I remember Johnny and I looking at each other thinking “Well, fun is over for tonight!”  But we were very wrong.

A DPS mustang got in front of the vehicle traveling the same way and started to weave back and forth and slowing down ever so slightly.  Well, the driver of the Lincoln obviously didn’t read any etiquette books as he clipped the DPS Cruiser which caused it to fishtail into the median.  We passed by the unlucky vehicle at 85 mph(at least that’s what our speedometer said!).

A Castroville Officer waited at his city limits and pretty much just watched us go by.  Smart man in that moment.

We thought the DPS Trooper was out of action but we were wrong again.  He flew by us like we were standing still.  Gabe again got on the radio and told us they were backing off a bit.  The DPS Vehicle slowed behind the Lincoln and then Johnny remarked that something was sticking out of the passenger window of the DPS Mustang.  It was a shotgun.  The DPS vehicle inched up beside the Lincoln and we saw a bright flash of fire emit from the shotgun’s barrel.   I thought the trooper had shot the driver but Gabe and Rick quickly told us that he’d shot the engine.  He backed off and waited for the engine to seize.  But it didn’t happen and the Lincoln continued to barrel down the highway towards San Antonio at breakneck speed, surely well over a hundred miles per hour.

THESE ARE MY NEWEST NOVELS.  The first came out on July 5th. Border Alliance is available for preorder and will come out August 8th!  GIVE THEM A TRY!